Click on the rotating images above for more information

What are pilonidal cysts?

A pocket of infection that occurs in the tailbone area is called a “pilonidal” cyst or abscess. These infections begin as enlarged pores in the crease between the buttocks. Pieces of hair can enter these pores, burrow their way underneath, and cause infection. Sometimes this only causes minor irritation, but other times it can cause a painful infection that requires surgical drainage. Patients can have different degrees of symptoms from this problem. Once pilonidal infections begin, they often continue to cause problems unless surgically treated.

Treatment of pilonidal disease can be a challenging and frustrating experience for both the patient and the physician. Dealing with this problem has been a challenge that Dr. Steven Immerman has accepted since he began his surgical practice in 1981. His current results are excellent: in 2013 he published a paper which described that approximately 90% of his patients demonstrated complete primary healing after one procedure, and 98% complete healing after a second procedure. He published a second paper in 2021 showing a success rate in simple cases of 98.7%.

Of the more complicated patients Dr. Immerman sees, who are requiring surgery after previous failed operations, the results are only slightly less successful, with an approximately 95% success rate.

“When searching the surgical literature one finds literally dozens of different procedures that have been proposed for this disease. I have personally tried many of these methods, and after much experimentation and frustration I have adopted a procedure that is very successful.”      Steven C. Immerman, M.D., FACS 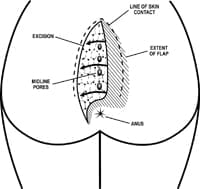 Why most surgery for Pilonidal Disease fails

Surgeons are taught to remove all the visible disease and either attempt closure or leave the wound open to heal secondarily. These approaches fail to address the fact that the disease process is caused by the deep buttock crease (also called either the natal cleft or gluteal cleft). A deep buttock crease remains moist at almost all times, promotes growth of bacteria, and creates pressure gradients which suck hairs into enlarged pores. Any procedure that does not address the shape of the buttock crease has a high failure rate; and that failure usually shows up as new pilonidal disease or a wound that will not heal. Unfortunately, the standard treatment in the United States and Canada does not address the shape of the cleft.

What we do differently, and why you should consider us.

Dr. Immerman performs a procedure called the Bascom Cleft-Lift, which flattens the cleft, and moves the incision away from the midline so it can heal quickly. This procedure (which is also called “cleft-closure”) has become his procedure of choice because of his high success rate — even in patients who have had multiple previous operations. He has had extensive experience with patients who have had chronic open wounds or have open wounds close to the anus.  This procedure is performed as an outpatient under general anesthesia. The pockets of infection are removed and the buttock crease is adjusted. After the operation, the buttock crease will be flatter. This usually heals in a couple of weeks without any packing or special dressings. There is a small drain that is placed and removed in a few days.

It is important to understand that just because a procedure is called a “cleft-lift” by one surgeon, doesn’t mean it is the same procedure called a “cleft-lift” by another. There is an extreme amount of variation between what surgeons are doing and calling a cleft-lift. We have seen many failed cleft-lifts performed by other surgeons, that do not look anything like the procedure that we perform. There are videos on YouTube, uploaded by surgeons demonstrating their technique for the cleft-lift that are not at all the same as the procedures described by Dr Bascom, Dr Karydakis, or performed by Dr Immerman. This web page shows the difference between a successful and an un-successful cleft-lift.

When selecting a surgeon to care for this disease process, the important issue is not whether you see a General Surgeon, Colorectal Surgeon or Plastic Surgeon. The key factor is whether the surgeon has expertise and interest in pilonidal disease, and is an expert on the cleft-lift operation.

Why the cleft-lift is more challenging after previous failed operations

This procedure works best for basic pilonidal disease up on the area around the sacrum where it usually begins. In patients who have had surgery that has failed, the situation can be drastically different for several reasons. One is that extensive tissue removal can interfere with the skin needed for the cleft-lift flap. Also, there are often openings and sinus tracts extending downward toward the anus – outside the area usually treated by the standard cleft-lift procedure. Most surgeons do not have a surgical strategy for dealing with these wounds and relegate the patient to prolonged local wound care, which may or may not be successful. Dr. Immerman has had extensive experience with dealing with these re-operative situations, and often can successfully extend the cleft-lift to treat these very low openings. However, these are the kinds of difficult cases that on rare occasions require a second procedure to get control.

It is important to understand that although specific operations have names and “success rates” associated with them, all the various operations for pilonidal disease are very dependent on the ability and experience of the specific surgeon for their success or failure. You may read that the cleft-lift has a “success rate” less than described in this web site – and that is the result of combining the results of many surgeons and ascribing a “success rate” to the procedure.

The numbers we present here are based on Dr Immerman’s specific patients, and the actual success rate may vary from year to year – but has remained in the 94-98% range for the last few years. As time goes by, it is possible that our patients will develop recurrence and the numbers will go down. We have had patients develop recurrences as far as two years postop, but not later than that. Also, we encourage the most difficult cases of open wounds and recurrent disease in the country to see us – so there is no attempt at selecting the easier cases to improve our numbers. We are treating many of the most difficult cases in country.